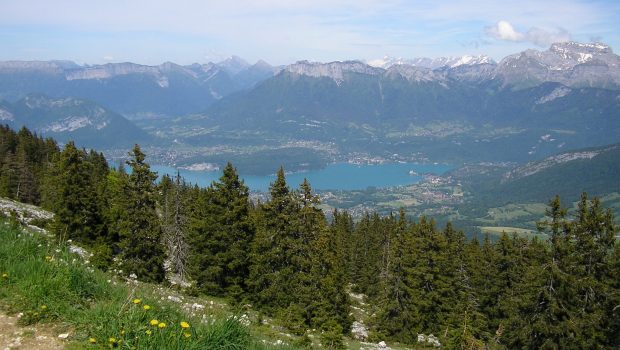 The Semnoz, whose toponym comes from Roman cartographers who named it “Salmon” because of its shape reminiscent of a salmon1, is a mountain of average altitude of the Massif des Bauges peaking at 1704 m. The Semnoz remains a very easy walk in summer since the road almost leads to the summit. Intended for the youngest, the ascent is very short from the carpark at the Crêt de Châtillon dominating Lake Annecy at 1699 m of altitude. In winter, the trail starts from the parking lot of the Semnoz resort and follows the Châtillon ski lift (blue track on the map). However, for the more trained walkers who want to climb the Semnoz from below, it is possible to reach the Crêt de Châtillon by starting from the hamlet of La Bergerie in the commune of Saint-Jorioz to take the “Sentier du Refuge à St-Jorioz” (red track on the map) climbing in the Semnoz forest. This route is difficult as it is 8.4 km long (16.8 km round trip) with a total of 1,050 m of cumulative gain. The panoramic view offered from the viewpoint indicator overlooking the Aravis, Les Bornes (with the emblematic Tournette) and the Mont-Blanc Massif, is majestic, and undoubtedly part of one of the most beautiful in Haute-Savoie.

Getting There (Semnoz’s ski resort)

From Annecy, follow the D41 road from the hospital towards Semnoz. In winter, parking is possible at the resort’s car park, while you can continue to Crêt de Châtillon in summer.

Getting There (La Bergerie hamlet)

From Annecy, take the D1508 road going towards Saint Jorioz. When you arrive in Sévrier, take the first exit on the right at the roundabout onto the D912 in the direction of Col de Leschaux. Once you reach the hamlet of La Côte, turn right on Chemin des Gardes and continue on the small asphalted road to park on a small parking lot on the right at the edge of the forest.

In summer, you can park at the Crêt de Châtillon and walk a hundred metres to the viewpoint indicator. In winter, I recommend walking with snowshoes: indeed, it is very accessible and the scenery is even more grandiose. The departure is at the ski resort. The path is on the right, in the direction of the summit of the Châtillon ski lift.

From the small car park, continue on the paved road to reach the two buildings of La Bergerie. The route leaves the Chemin des Gardes and then rushes into the forest on the “Sentier du Refuge à Saint-Jorioz”. The progression is regular and made by wide switchbacks. Further on, the path reaches the Chalet de Bénévent, which is to be left on the right to continue towards the Crêt de Châtillon. The path then passes under a high-voltage line and continues in the direction of the Crêt de Tertère. Finally, you reach the road of the Semnoz resort that you have to cross to continue on the passable track up to the Crêt de Châtillon.