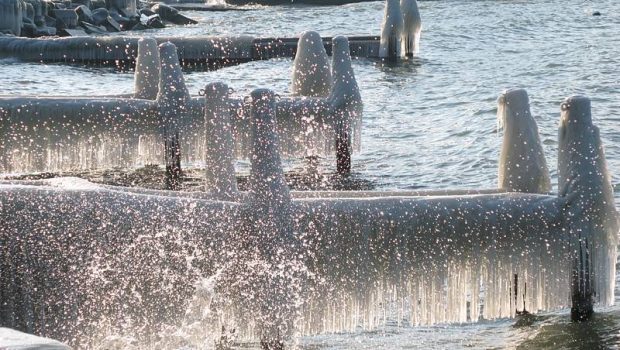 Published on 6 February 2012 | by Pierre-Alexandre

VHere is another aspect of Lake Geneva. These photos, taken on January 20, 2005, show the area around the lake after 6 days of freezing winds, blowing with gusts at 100 km/h, with temperatures not exceeding -4 °C and sometimes -10 °C.
The spray rising from the crests of the waves turns into ice and covers all that they touch. Many boats moored to exposed locations were sent from the bottom under the weight of the accumulated ice.
The icy shores of Geneva and Versoix, real skating rinks, as well as sidewalks, turned into a gallery of somewhat unusual sculptures.
Some photos of Geneva and Versoix under the ice can be seen below.

Photos of Lake Geneva covered with ice (20th of January 2005)

Same story in 2012: as in January 2005, the cold spell that took place in Europe in early February 2012, helped by strong gusts, again transformed the shores of Lake Geneva into rinks. The urban furniture, captive of the ice, has endowed with an ephemeral aesthetic dimension as it looked like a sculpture or unusual work of art.

Temperatures this day did not exceed -8 degrees Celcius.
Below are pictures of the Savonnière beach in Collonges-Bellerive near Geneva, as well as the village of Yvoire. More photos of Yvoire under the ice are available at this link.

Pictures of Lake Geneva covered with ice (6th of February 2012)

Crescent shaped, Lake Geneva is a border between France and Switzerland, the northern part of the lake being in Swiss territory and the southern part of French territory. Its main characteristics are:
Area: 582 km2, of which 41% is in France;
Perimeter: 167 km, of which 54 km in France;
Maximum width: 13.6 km, between Amphion and the bay of Morges;
Length: 73 km, from Geneva to Villeneuve;
Average level: 372 m above the sea;
Depth: 310 m, between Evian and Ouchy;
Volume: 89 km3.

Lake Geneva collects the water brought mainly by the Rhone (178 m3 per second).
If the lake were empty, it would take 12 years to fill it.