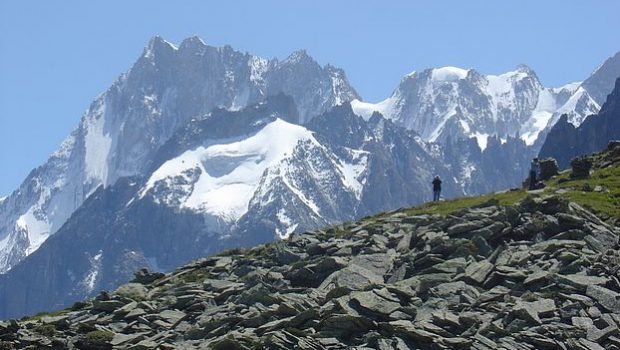 During a stay in Haute-Savoie, an excursion to the Balcon Nord is undoubtedly the one that will leave the most unforgettable memories.
The outing takes places in a magical setting in the heart of the Mont Blanc Massif and goes from the Mer de Glace to the base of the Aiguille du Midi by following the route of the Balcon Nord.
The itinerary described is the most challenging and is aimed at well-trained walkers because it does not use any mechanical lift; Eight hours are needed to make the loop.
The Montenvers train on one side of the Balcon Nord and the Plan de l’Aiguille cable car on the other significantly reduce the elevation gain. Several possibilities are available: ascent with the Montenvers train and descent with the cable car or vice versa; Or ascent with the train or the cable car the and descent by one of the trails.
The Balcon Nord itself in both directions will require only two hours by the Signal de Forbes.

In Chamonix park in the parking lot of Biolay or Planards on the right just before the railway.

From the car park, take the Montenvers trail to the right of the chairlift that rises in the direction of the wood.
After about ten minutes, at the sign, turn right towards “Montenvers by chalet de Caillet.” The trail climbs without difficulty into the forest until reaching the Chalet de Caillet.
You’ll cut the Montenvers railway twice: there’s no risk as the track is clear.
After some switchbacks, the buildings of the station are in sight. The place is very busy in the summer, and the contrast with the serenity of the ascent is striking.
Continue in the direction of the Plan de l’Aiguille by the Signal de Forbes.
The climb is steep and the effort significant on the short switchbacks that rise rapidly above the Hôtel du Montenvers.
At the Signal de Forbes, the landscape is magnificent: all the peaks of the Mont Blanc Massif are within sight. A pair of binoculars will help follow the many ropes on the Mer de Glace and the mountaineers on the Drus or Aiguille de Blaitière.
In your back, it is the whole Balcon Sud that takes place in front of you: Brévent, Flégère, Aiguilles Rouges, and to the extremes, the Aravis range and the dam of Emosson.
After this welcome break, take the track and continue almost flat until a passage of short switchbacks that cause a rapid loss of altitude.
The itinerary leads you into this fairytale scenery in the direction of the arrival of the cable car of the Plan de l’Aiguille, the intermediate station to the ascent to Aiguille du Midi.
The ground, until then rather dry, approaches a wetter area describing many meanders due to snowmelt.
A final climb reaches the refreshment bar of the Plan de l’Aiguille at the foot of Aiguille du Grépon and Grand Charmoz.
A trail leading to the right of the chalet allows getting in fifteen minutes to the beautiful Lac Bleu at the end of the Balcon Nord.