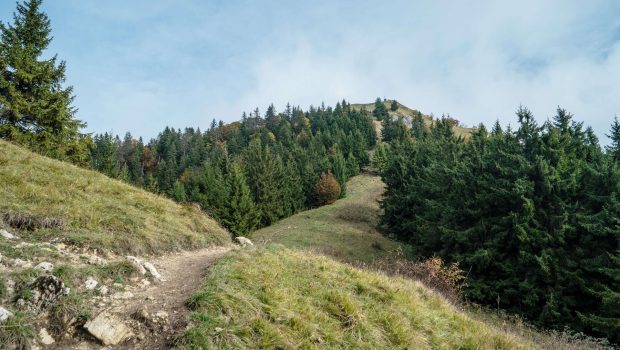 Published on 1 October 2017 | by Pierre-Alexandre

Mont Forchat, whose toponym probably derives from the word “fourche”, as the peak appears to be a two-toothed summit from Lake Geneva1, is a low altitude mountain located in the heart of the Vallée Verte that offers a superb panorama on the Chablais, but also on Lake Geneva, the Bornes and Mont-Blanc Massif. The itinerary that I propose here is presented in the form of a loop joining the Col de l’ Encrenaz and Mont Forchat from Granges Mamet, then descends to the Creux de la Marlat and the Col des Moises to reach the starting point. Although short, the climb is very steep over the entire course with an average slope of 28%, which led me to classify the hike as “Intermediate”. For the anecdote, the statue at the top was erected on September 21, 1898, to celebrate the 300th anniversary of the conversion of Chablais to Catholicism by Saint Francis de Sales, a clergyman who arrived in Thonon in 1594.

From Annemasse, take the direction of Taninges on the D907 road and, at Pont de Fillinges, turn left towards Boëge on the D20 road. Continue up to Habère-Poche where you will have to follow on the left the direction of Thonon and Col de Cou. Pursue and pass the Vernay then Ramble hamlets. Arrived in front of a large chalet called “Le Chardet”, follow the direction of the Col des Moises for about a hundred meters; the path leading to Granges Mamet is just after a curve on the right. Park at the edge of the forest road so as not to obstruct traffic.

Follow the easy forest track towards Granges Mamet where you can see the Mont Forchat, recognizable by the statue at its summit. Further on, the trail becomes much steeper and winds its way through the communal forest of Habère-Poche and Lullin. After a continuous effort over forty minutes, the Col de l’Encrenaz appears and already offers an interesting view of Lake Geneva. A break is, of course, welcome before the final ascent leading to the summit of Mont Forchat. The panorama is very wide on the Chablais and the Jura, and, in clear weather, on the Mont-Blanc Massif as well as the Bornes in the south-west. You can also observe many gliders flirting with the ridges of the Vallée Verte.

As a sign just before the descent indicates, the slope is very slippery in wet weather; it’s important to be careful, especially with the younger ones. Once you arrive at the Col de l’Encrenaz, take straight ahead on the marked path towards Col des Moises. After crossing a grazing area, the path becomes steeper and forms tight switchbacks in the woods until it reaches the Creux de la Marlat. For walkers parked at Granges Mamet, a path on the left joins the chalets directly by cutting in the forest by a marked path. For the others, you have to take the direction of the Col des Moises reached in about ten minutes. When you arrive on the departmental road, turn left to reach the forest path.