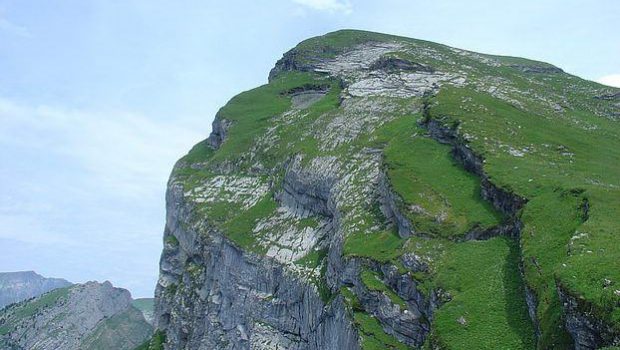 Aouille de Criou, whose name would mean “stone peak” or “rock peak”1, is a large rocky plate at 45° which ends at 2023 m above sea level by a vertiginous cliff of more than 700 m above the Refuge de Folly. Well visible from Samoëns, which it dominates from all its height, the Aouille de Criou is a belvedere of choice on the Massif du Giffre, but also the Aravis, the Massif du Mont-Blanc and the Grand Massif. Despite the absence of any particular difficulty to reach the Chalets du Criou, this hike is for trained hikers due to the significant gain and the length of the route. I advise you to continue past the chalets to reach the cliff and the impressive view overlooking the Col de la Golèse. The most courageous will be able to continue until the Aouille de Criou materialized by a cross. Be careful, however, the gain becomes much greater and the last part of the climb requires a sustained effort. From intermediate difficulty to the Chalets du Criou, the rating becomes “Hard” for the summit.

Care must also be taken in wet weather when descending from the top. Indeed, the path between the Aouille de Criou and Barme can be very muddy and slippery.

From the car park, take the forest track on the left and follow it until you reach the first fork: leave the trail coming from Vallon d’en Bas and continue to the right.
The climb is steady until arriving at a second crossing: turn right and go up to the chalets and the refreshment bar of the Trot (sale of goat cheeses) where the landscape emerges as you leave the forest.
After a welcome break, continue the less steep trail to get to a small group of chalets not far from the Chalets du Criou.
To reach the cliff, head up the chalets towards a stone trough populated by salamanders.
The first 100 meters of the track are poorly marked; Fortunately, cairns placed on the stones give the direction.
The path begins to the left of the trough; A large rock carries a half-erased old inscription indicating the direction to follow.
As the progression progresses, the pathway becomes easier to follow and gets to a fence that separates the pasture from the heights.
The view over the Valley of the Giffre is impressive and deserves the effort.
The footway continues along the fence to reach Aouille de Criou materialized by a visible cross.
Be careful as the route is very steep and the elevation gain not negligible.


Photos of the Chalets du Criou