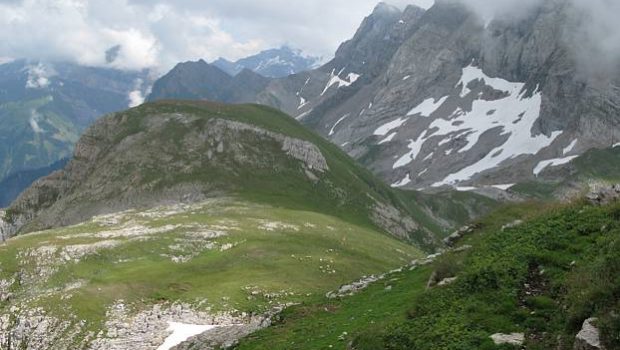 Published on 6 August 2008 | by Pierre-Alexandre

Let’s go to Morzine for a hike that takes part of the “GR 5 Tour des Dents Blanches” to get to the Tête de Bostan (or Tête de Bossetan).
The route starts from the Pont de Chardonnière, crosses the Terres Maudites, passes by the Pas de la Latte before reaching the GR5 that leads to the Tête de Bostan.
The return trip takes place via the Col de Bostan, the Refuge de Tornay, then Col de la Golèse before returning to the Pont de Chardonnière.
The outing’s hard, because it’s quite long with a consequent elevation, and because a passage to the Pas de la Latte requires a certain vigilance especially in wet weather.
Yellow markers on the rocks are very useful to follow the way in the meadow before the Terres Maudites.

Reach Morzine. In the village, follow the direction of Lac des Mines d’or. After a long series of switchbacks follow a road leading to the Pont de Chardonnière.

From the Pont de Chardonnière, take the road on the left (and not the pathway after the bridge marked with a “Forbidden Traffic” sign) that leads to the Chardonnière hut reached in about ten minutes.
The path goes to the left at the chalet behind the fence and enters the wood. It is devastated by the passage of herds and requires some attention in the most plowed places.
Pretty soon, the track leaves the forest on a large meadow that you have to get through by following the yellow markers on the rocks.
Thirty meters after the last picket, turn right and cross the small stream to climb the steep slope.
Follow the yellow dots on the rocks until you arrive at the bottom of the cliff and the passage that goes up towards the ridge.
Always follow the yellow markings on the blocks to get to the Pas de la Latte finally.
The use of the hands is necessary for the crossing of this fault without real danger.
After this initiation to climbing, a slight plateau reaches the last part of the ascent before coming out on the GR5.
From here, the view is beautiful and the Tête de Bostan. Turn left, and after about twenty minutes, the cairns at the summit are won.
The panorama is magistral, and the chalets below the Swiss side look tiny.

Proceed to descend to the other side of Tête de Bostan. A short steep passage goes down quite frankly before arriving at a good track that heads to the Col de Bostan.
The path is obvious from there and runs along this magnificent valley to a junction where it will be necessary to turn right on the footpath that goes up slightly in the direction of the Refuge de Tornay.
As you approach the refuge, follow signs for the Col de la Golèse.
A rapid climb reaches a small pass before climbing down to the Chalets de la Golèse.
Continue the road until you get to a sign indicating Chardonnière on the right. The track is quite steep in the forest before Chardonnière and the trail taken in the morning.
Note the possibility of passing through the Refuge de Vigny after the Col de la Golèse.
An alternative route at the descent is possible: instead of passing through the Col de la Golèse, retrace your steps and take the GR5 to get to the Col de la Golèse.
Shorter, this itinerary is also much less attractive to my taste, because it does not allow to discover this beautiful combe where the meeting with marmots is not rare.