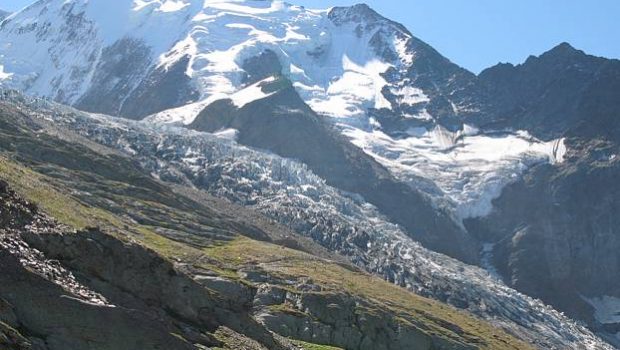 Published on 14 September 2008 | by Pierre-Alexandre

The Nid d’Aigle is the terminus of the famous Mont Blanc train, the arrival point of a large number of tourists of all nationalities and departure of the route to Mont Blanc.
The route passes through the pastures of the Are and follows along Bionnassay Glacier at the foot of Aiguille de Bionnassay.
The well-marked track, without difficulty down to the bottom of the glacier, becomes harder when it comes to climbing two short metal ladders sealed in the rock and the crossing of a rocky passage equipped with a handrail just before the station of the Nid d’Aigle.
The arrival at the Cabane des Rognes among the ibex is magical, even if the place is very busy in summer. The trail that continues towards Tête Rousse can awaken, in some, the call of the summits under the eternal snow.

Head towards Chamonix and go to Saint-Gervais. Follow signs for Les Contamines-Montjoie. At the exit of Saint-Gervais after 1 km take the small road left towards Bionnassay.
The mountain road is very narrow and requires vigilance for the possible crossing of vehicles.
Arriving at Bionnassay, head to the car park of Crozat.

The trail, marked with signs indicating the direction of the Nid d’Aigle, starts right at the entrance of the Crozat car park. The path enters the forest to get to the chalets of Planet following the high-voltage line. The crossroads is reached very soon after a few switchbacks: leave on the left a footway that goes in the direction of Bellevue, and continue on the right. You arrive then at a barrier delimiting the alpine pastures of the Are. The chalet is located at the top left and is hardly visible from the road.
A small explanatory sign describes the breed of the alpine cows (Hérens breed) that we will meet here.
After an extensive plateau, the route goes up to reach the back of the moraine of Bionnassay Glacier.
The pathway then goes to the left and crosses a small torrent before rising more frankly to get to a first passage equipped with a handrail and then a metal ladder.
A second scale allows the crossing of the last perilous passage. The magnificent landscape on Bionnassay Glacier turns away the eyes from the path that nevertheless requires particular attention on this part of the ascent.
Continue to reach a short portion equipped with a handrail before a long crossing that leads to the arrival station of the Nid d’Aigle.
Follow the road towards the restaurant and take the left track to the Refuge de Tête Rousse and the Cabane des Rognes. The progression is pretty physical in the Désert of Pierre Ronde. Pretty steep, the footpath goes towards a rain gage that is passed on the right.
Another effort and the roof of the Cabane des Rognes appears; Keep moving and bypass the Cabane des Rognes by the right (following red markings) to reach a vertiginous ridge, but without any danger, dominating the Chamonix Valley.
The place is ideal for observing Dôme du Goûter and its visible refuge, Aiguille de Bionnassay, and on the right overlooking the valley, Aiguille du Midi and, on the other side, the Brévent, and the Aravis Range.
Several ibexes accustomed to the frequentation of the places bask in the sun while watching the many hikers and climbers who go to the assault of the mythical “rooftop of Europe.”

Take the same road as described above. Please note that is strictly forbidden to follow along the railway to go down to the car park.

Photos of the Nid d’Aigle and Bionnassay Glacier

We tried this trail on 29 Sept 2018 and there were signs saying that the trail is closed. This could be a seasonal closure (the tram stops running mid-September), but I think someone we met on the trail said that it is (now) a very difficult trail because a ladder had fallen. I tried to find some more information online, but did not find much; if anyone has more accurate information, I would be happy to hear it.

P.S.: Thanks very much for this great website; I’ve tried several trails and have never been disappointed!

Thaaaaankkk youuu
I spent so many hours on internet trying to find this route. Every site just tells you to get the tram. Thank you very much