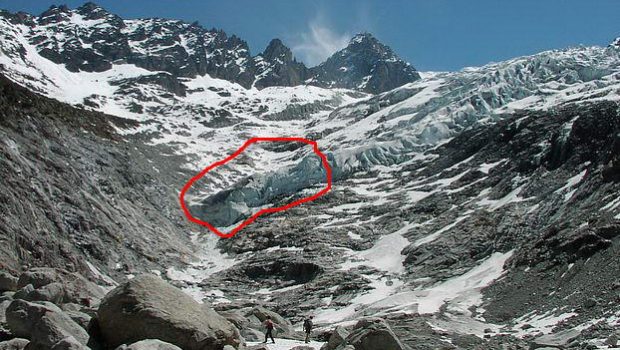 An illustration of the acceleration of global warming at work… On April 28, 2007, we chose the Trient Glacier as a hiking goal in order to rediscover this marvelous site that allows reaching a beautiful glacier. Breathtaking glacier, but for how long? We were amazed by the vision of this glacier seen in May 2004, which has retreated strikingly in three years.

The last two pictures are not photographs for scientific purposes, but shots taken three years apart (2004 and 2007) with the sole intention of keeping a memory of this impressive outing.
The framing, although slightly different, allows seeing the retreat of the glacial tongue.
The missing part, highlighted in red, is several meters thick, and I was minuscule at the time beside this wall of ice.

The first six photographs were taken by Nöel Cramer between 1972 and 2009, while the two following photographs are the work of Philippe Ratel taken between 1985 and 2008, which allows envisaging the change over a period of time. I thank them for sending me these images that constitute a testimony of the changes taking place in the terrestrial ecosystem, in particular global warming, whose human origin is no longer to be doubted.

Photos of the Evolution of Trient Glacier over time

These comparative photos could have been made on many other glaciers, such as the Bossons Glacier or Pélerins Glacier, well observable in the Chamonix Valley, whose retreat is also astounding.

I have no lessons to give, but if there is no awareness of how we live on this planet, I am afraid that these wonders become remembrance that our children will not see.