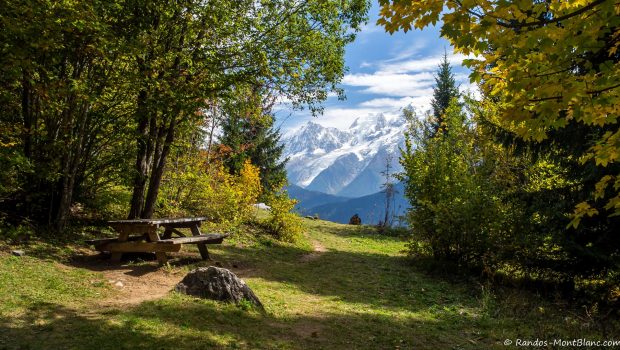 Published on 28 September 2017 | by Pierre-Alexandre

The Aiguille de Varan is one of the main peaks of the Sallanches valley, offering a magnificent view of the Mont Blanc Massif on one side and the Aravis Massif on the other. Given the difficulty, I propose not to climb it, but to walk to the Chalets and Refuge de Varan located at its base. The chalets can be reached either from the Plateau d’Assy (red track on the map) or from the Bay-le-Coudray car park (blue track on the map). Personally, I prefer the Coudray variant because it is much more pleasant than the Plateau d’Assy route, which offers few views of the surrounding mountains.

Getting There (departure at Plateau d’Assy)

Getting There (departure at Bay-le-Coudray)

From Passy, go up to Bay then continue in the direction of Coudray and park on the second parking lot located at the end of the road.

The trail is quite wearisome in its first part. Quite steep, mostly in the undergrowth and offering a mixture of stones and tar, it rarely gives you glimpses of the surrounding peaks. After an hour, we arrive at the Chalets de Curralaz; the environment is transformed and the path, although steeper, becomes also much more pleasant: indeed, the eye lingers on the omnipresent Mont Blanc and, above the crest, on the Refuge de Varan perched at the edge of emptiness. The arrival on the plateau immediately makes you forget the effort of the climb. The view is striking on the Mont Blanc Massif, the Aravis Massif, the Pointe de Platé and the Pointe d’Anterne. The Aiguille de Varan dominates the plateau from all its height and one begins to follow the path that leads to its summit. However, it’s another much more challenging adventure on a dangerous trail with some climbing techniques when you reach the summit. This ascent is therefore reserved for experienced hikers.

From the car park, follow the direction of Les Chalets de Varan on the passable track going into the forest. This path is quite steep and describes some switchbacks. Later on, you arrive at a picnic table offering a splendid panorama of the Mont-Blanc Massif. Further on, you will find a sign indicating the direction of the take-off area for paragliders; from there, follow a small path on the right reaching the chalets in about ten minutes.

Take the same route as the ascent. Please note that it is also possible to descend through the take-off area of the paragliders.

Photos of the Chalets de Varan