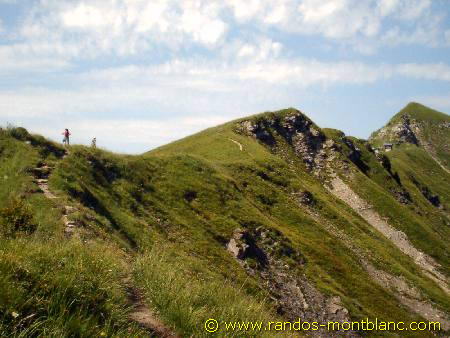 La Bourgeoise constitutes a very easy walk whose summit allows a panoramic view of the Mont Blanc Massif, Mont Buet, and the Aravis Range. In the summer, La Bourgeoise is a popular site for paragliding. Pointe d’Angolon placed opposite, allows climbing a little and better observe Dents Blanches as well as the Mont Blanc.

Take the path to the right of the road before the Col de Joux Plane and follow it in the direction of the summit that one sees from the first switchbacks.
Half way, you will pass some chalets that you have to bypass on the left. Then, the pathway gets a bit steeper to win the summit of Bourgeoise. Leave on the left the path that leads to the top of Pointe d’Angolon (which will be taken later), and reach La Bourgeoise.
From there, retrace your steps and take the trail going to “Pointe d’Angolon.” A short, abrupt climb brings you to the summit of a peak. Go down again to reach the other slope where you can see the Lac de Joux-Plane.
From there, you start the ascent of Pointe de Chamossière, quite steep in places, with a magnificent panorama. Then follow the ridge path until the arrival station of the Chamossière chairlift.
The peak of Pointe d’Angolon is now very close. I strongly advise the use of the rope for children as the last meters of the ascent are technical, and a fall at this place would have serious consequences.

The descent begins under the chairlift and brings to the Lac de Joux Plane. From there, follow the road for about ten minutes to reach the parking lot further down.